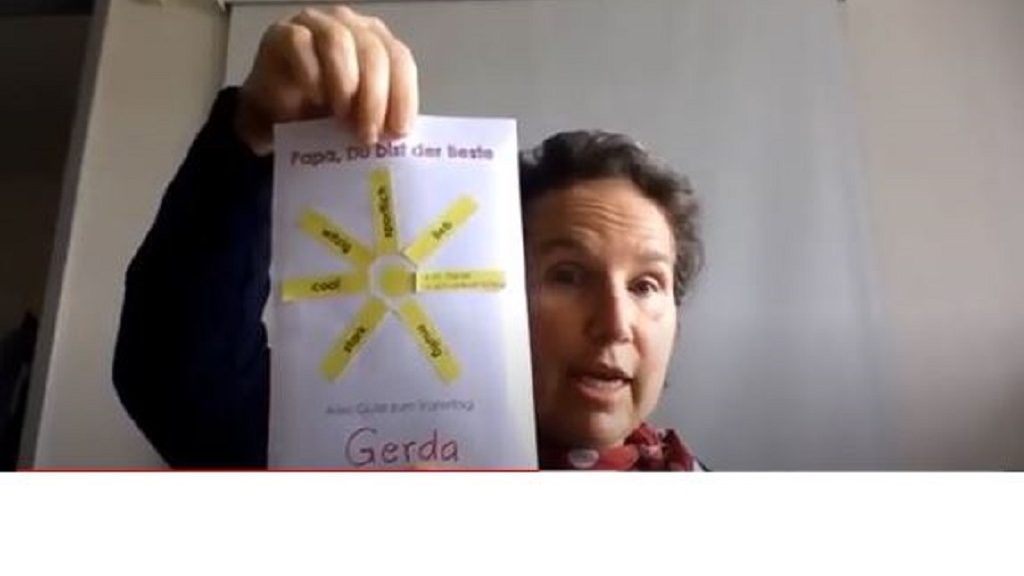 We are looking forward to Fathers Day on Sunday 5 September.

Here is Gerda’s video showing how to make a lovely Fathers Day sun card. Hopefully you can play it straight from the link, but for best results, download it and then view it.

You can download the pattern – either in colour or black and white* – to print and cut out, or just look at it and draw your own. You’ll need scissors, glue and something to write with.

Older children might like to make a cloud version of the card, writing the words in themselves.

You can choose from lots of adjectives to describe your Papa, or make up your own.

*Your German lesson bonus: Note the file name of the black-and-white picture ends with “SW”. What do you suppose that means? Schwarz-weiss, natuerlich! 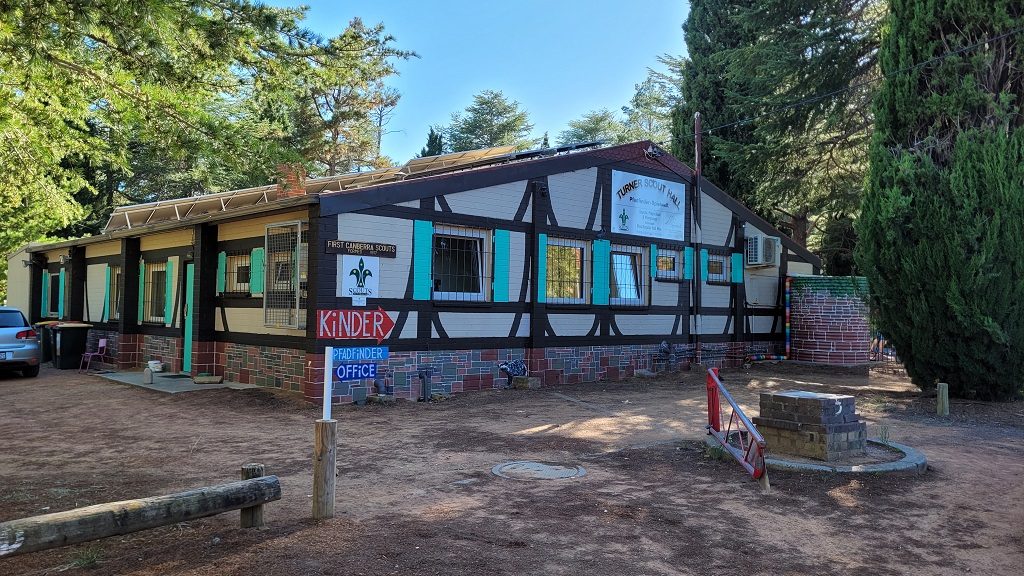 Our Fachwerkhaus (half-timbered house) with shutters and stone foundations is also home to a bunch of Australian and European birds and animals, hiding and waiting to be discovered. Visit our hall and see if you can find them all!

This amazing mural is the work of local muralists and artists, Byrd and Hanna Hoyne.

The reaction from the public has been very positive. We’ve even had emails from complete strangers saying they bike past the hall each morning and are loving the new look! We hope our Fachwerkhaus nestles nicely in amongst the “Black Forest-like” coniferous trees and is a nice addition to the renewal of Haig Park.

Here’s the “before” photo, below:

And the “after” photo:

Here are some of the little animals you might hope to find. There are lots more!

Here are some photos of the transformation happening, including Byrd in a “nest” up in the air:

Below is our rainbow rain worm and stone wishing well rain tank. The red text in old Germanic script on the wall is an old German tradition: carpenters would carve sayings into the wooden beams of the Fachwerkhaus (half-timbered house). These carved sayings are called Giebelsprüche.

Our text reads “Der Regenbogen Regenwurm spricht: Wir spielen auf Ngunnawal Land”. It is our Australian acknowledgement of country, and translates as “The rainbow rain worm speaks [and says] we are playing on Ngunnawal country.”

Come back again at the end of the 2021, and see if you can find more, as there are wonderful plans for the east wall too! Here is the east wall “before”. It will be different to the west and south walls. Can you imagine what it will look like?

Somewhere around 200-250 parents and children attended the 2021 Lantern Walk, and enjoyed seeing the children’s hand-crafted lanterns, the delicious Bratwurst sausages and sauerkraut, the German music, the warm tasty Gluehwein and yummy Kinderpunsch, singing the lantern walk songs, the atmosphere, catching up with friends, the little bonfires, the Pfadfinder play about Sankt Martin, and of course the lantern parade.

Thank you to the organisers and everyone who contributed food and volunteered at the event. We all enjoyed it!

Here are some photos. If you have more photos (particularly of the gates of Amiens at night, the Children’s Circle parade in the ‘forest’, and the Pfadfinder play), please send them along so we can post them for all to enjoy. 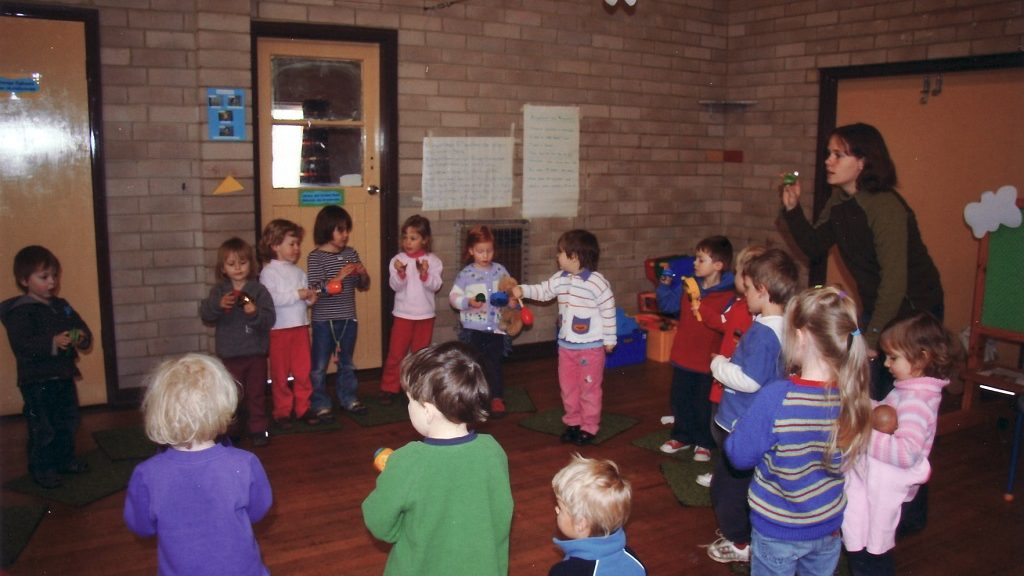 Ever wonder what the Turner Scout Hall looked like a few years ago? And what magical things happen at working bees each year?

The hall has been transformed over the years by the input and vision of the committee and parents. We’ve had ACT government grant help a few times as well to purchase capital items so we can deploy our amazing teams of parents to put in the work to make these improvements.

When we first arrived at the Turner Scout Hall in 2008, we faced draughty single pane louvre windows, ancient electric heating that didn’t heat the hall properly, the kitchen was falling apart, there was graffiti all over the exterior, there was no playground, no fence, two toilets, two sinks, two and a half tonnes of rubbish to be taken to the tip….

It is fun to look back at the old photos and see that quite a number of the children in the photo above joined us at Pfadfinder, and some are still with us a decade later as some of our oldest Venturer scouts!

To get an idea of how dedicated our parent group is, and what the Scout Hall looked like when we first arrived in 2008, check out these amazing photos of some of the things our volunteers have achieved, transforming our hall into a licensed children’s services venue, from 2008 to 2010.  And it just keeps getting better! 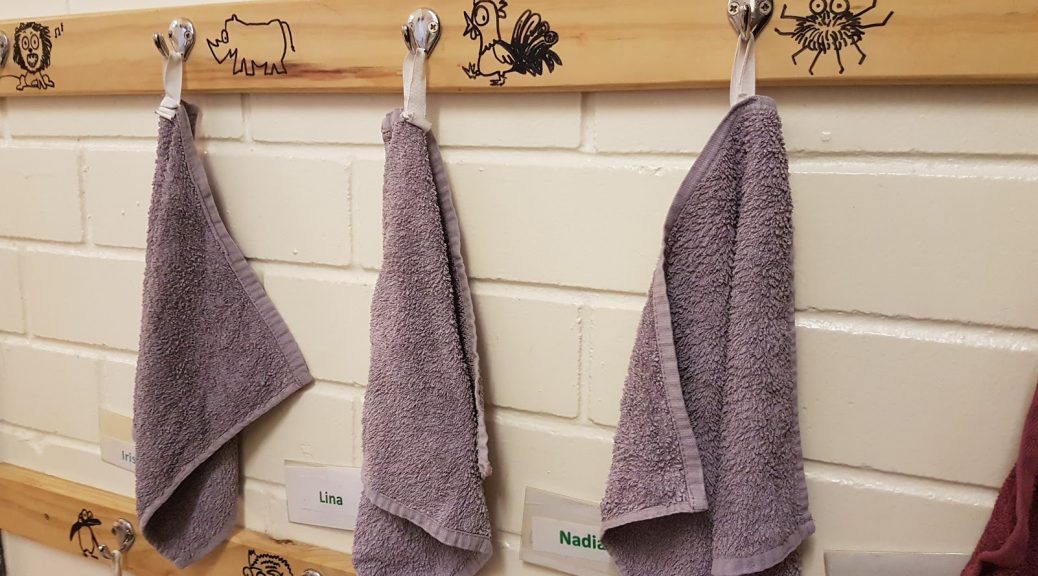 The ABC news live COVID-19 coverage each day is a great place to keep up to date with the latest news in this rapidly changing and developing situation.

Spielwelt has decided not to wait for ACT schools to close. We are taking action earlier as a precaution, especially given the knowledge of what our extended families in Germany are experiencing already.

For Spielwelt the situation is as follows:

1. Schlaumaeuse put its sessions on hold until further notice, from 6pm on Wed 17 March 2020.

2. Pfadfinder ceased meeting face to face from Wed 17 March, and will carry on online.

4. The German Australian Playschool held its last session on Mon 23 March, and will reopen as soon as it is safe to do so. Teachers will prepare regular emails for families and include activities, songs, ideas and tips (and hopefully even videos) to help families offer GAP-at-home for their children.

Have written separately to all our groups to let them know about the refund policy and how it applies to them, and exactly how any childcare subsidy is likely to be affected.

All our groups aim to re-open later in 2020, when the COVID-19 situation has resolved to the point where bans and distancing measures have been lifted and the health risks are greatly reduced. 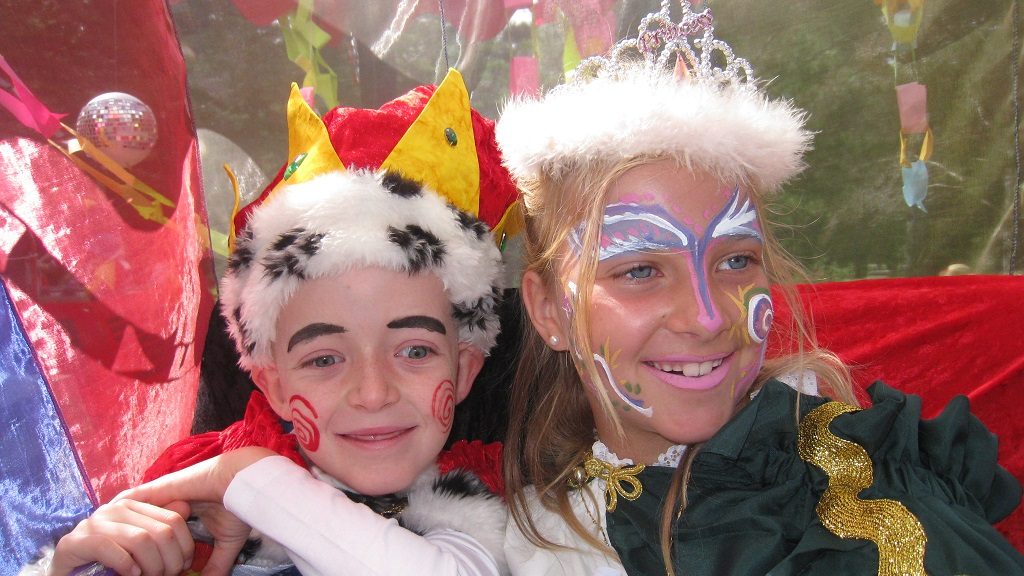 In light of the COVID-19 social distancing measures being recommended for large gatherings … Karneval is postponed. Enjoy your weekend otherwise and stay safe, everyone!

Read all about our Karneval here!

The German Immersion Program Parents & Friends (GIPPF) have been very busy with their initiative: researching and working towards the establishment and implementation of a German Language and Culture Program in a new public primary school when it opens in 2021, comprising of a German Immersion Program, German language program for the mainstream students, and German cultural events to be celebrated school-wide.

The GIPPF has consulted with the ACT Education Directorate on how to implement this initiative and have developed a strong business proposal. Furthermore, they have received letters of support from key players in bilingual education and German language in Australia.

In August, they are meeting with the Swiss Ambassador and the Cultural Attaché of the German embassy who have expressed an interest in the initiative. They are visiting the German International School Sydney and Froebel Australia, and will be presenting the initiative at the ACT German Mini-conference.

The decision however ultimately lies with the ACT Minister for Education  and Early Childhood Development, Yvette Berry MLA.

As there is no public primary school in the ACT offering a German language program, this is an important initiative for the German-speaking community to support.

Keen to be kept informed or help establish the program? Email Brigitta at german.primary@spielwelt.org.au 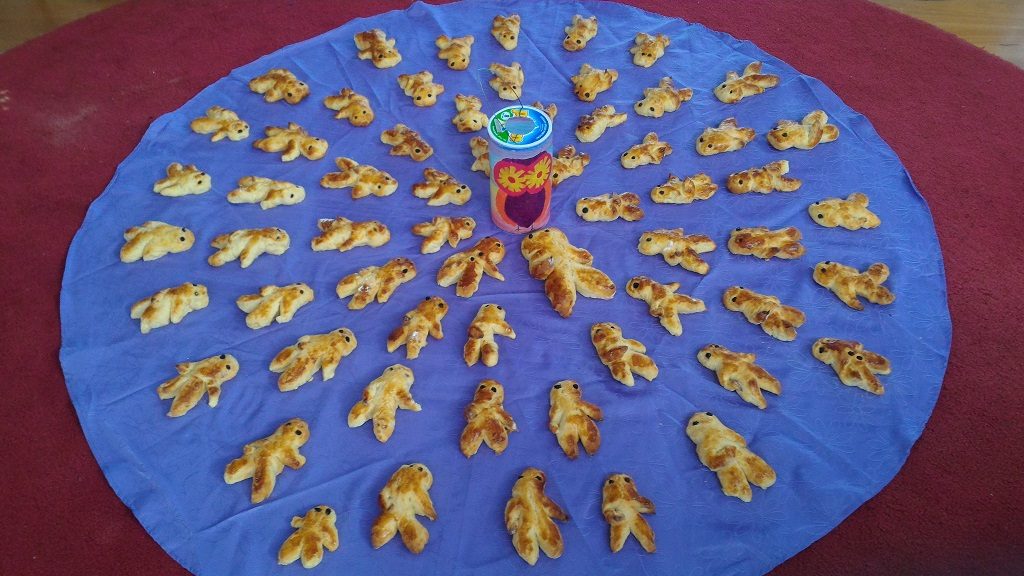 Calling all parents and friends of the German language who are interested in setting up a German immersion program in an ACT primary school!

We are looking for committee members, teachers, parents,  individuals and organisations who are interested to make this happen.

Read about the aims of the German Immersion Program Parents & Friends group, and email Brigitta on german.primary@spielwelt.org.au 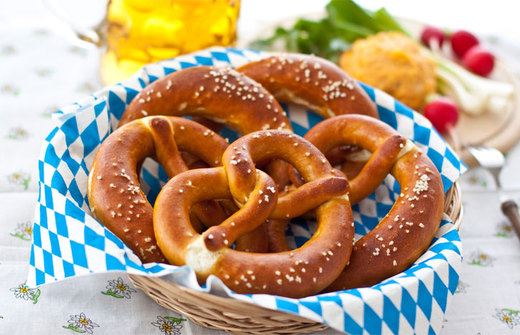 Did you know there are heaps of great social groups for German speakers of all ages here in Canberra?
The Stammtisch meets once a month at Tilley’s.  Tag-along children are welcome, too.  Stammtisch is also on Facebook.
There is a German Book Club which meets in its members’ homes, usually with a glass of wine to accompany good discussion about books.
Online there is a Germans in Canberra Facebook group
There are also German, Austrian and Swiss clubs and choirs.
There are local German radio broadcasts on CMS 91.1FM, on Mondays 6-8pm (Swiss German) and Tuesdays 8-10pm (German). They welcome people calling in or coming on the show to chat.
And have a look at the Spielwelt webpage and look under About >> German in Canberra. for info about other groups, classes and more.
Das Zentrum in Civic screens German films, offers a German library, classes, have social conversation groups, and more.
For German-speaking kids, there is of course:

The Pfadfinder scout group welcomes new scout leaders or German speaking guest speakers who want to tell us about things they are passionate about or what they do for work. We can even visit you at work and hear about what you do.
If you like working with children, feel free to add yourself to (or use) our German babysitters and tutors list.
For ladies only, there is the Deutsche Damen Dinner which meets each month in Kingston or Lyneham, depending on the season.
Viel Spass! 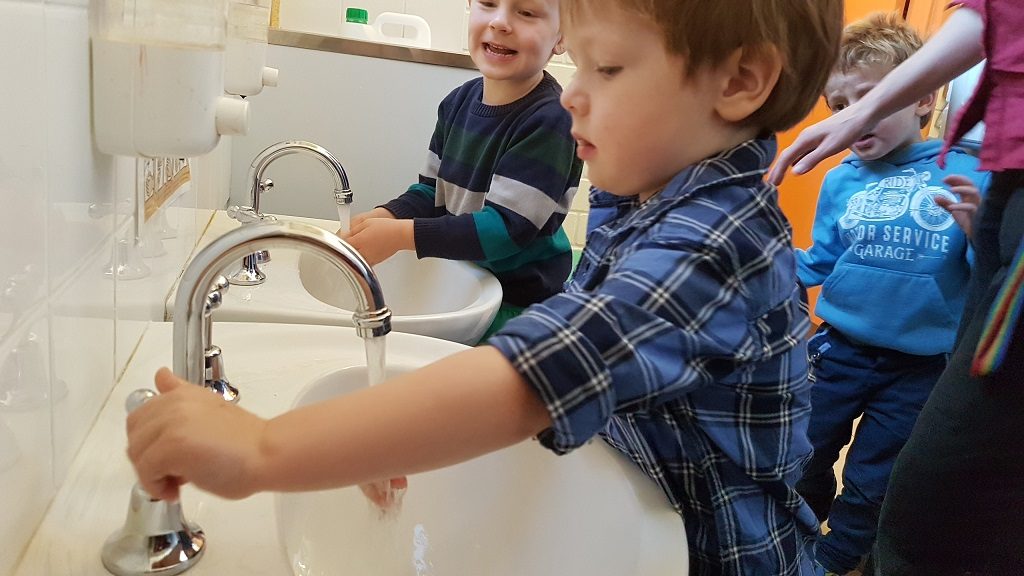 Over the summer holidays, Paul from JimFin Gas Fitting & Plumbing was very busy installing all sorts of treats for us.

We are now enjoying a new junior toilet in the girls washroom, and double children’s sinks in both washrooms.

Paul visited us today to put on the finishing touches we requested, by installing another two sets of his most heavenly child-friendly quarter-turn taps.

Being the friendly guy that he is, he also  fixed a leaking tap, gave us a lesson on washers, checked we had safe water temperatures for children, and replaced the covers for our water meter and mains tap which were broken and hazardous.

This all helps us look after our water consumption, and be the clean green community organisation we strive to be.