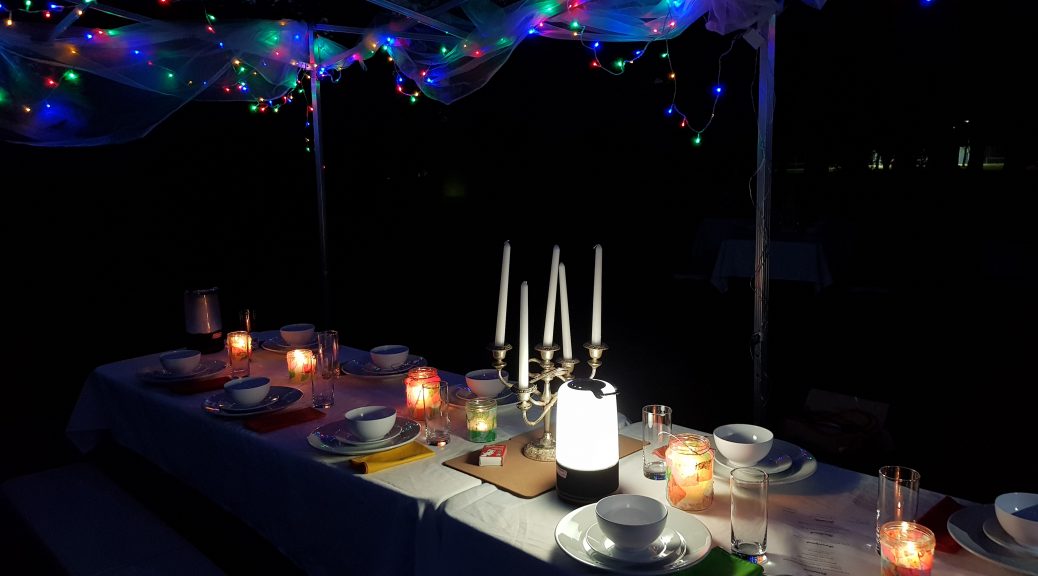 The Monday scouts and venturers enjoyed an outrageous picnic in Haig Park. This wasn’t just any picnic!

White table cloths, a candelabra, colourful table lights, classical music and black-tie waiter service were the order of the evening. All set up under twinkling coloured lights in the park at night.

The main course was “freshly delivered Turkish pide”, courtesy of a Cathy (in a pink flamingo costume, of course, because you know, it’s scouts and an outrageous picnic) and her team from the Haig Park experiments project.

As it was a scouting event, there had to be plenty of silliness. Our black-tie venturer scout waiters were harnessed and tethered to nearby trees with bungee cords, making it highly entertaining to see them try to deliver food and drinks to the tables.

Scouts enjoyed a three course meal. At each of the three courses, an envelope was delivered and its enclosed instructions were read out: During the Vorspeise, scouts could not feed themselves, but had to feed those next to them. During the Hauptgang, scouts caught speaking anything other than German had their food swiped by a waiter and had to beg (auf Deutsch, natuerlich) for it to be returned. During Nachtisch, scouts had to be blindfolded with beanies or scarves, and eat without seeing anything.

Then the bill arrived at the table. Oh dear! Rather expensive! Nearly 1000 Euros, including the Mehrwertsteuer and Gastronomie fees. The scouts were given three options for payment: cash, sing, or wash the dishes. Predictably, they chose the singing option and were given the lyrics and forced to sing four German children’s songs as a choir. It was really good fun!

We are grateful for the wonderful support of the Haig Park Experiments team.

Keen to be Green report: This event produced about 200 grams of waste to landfill. A great result, Pfadfinder scouts!