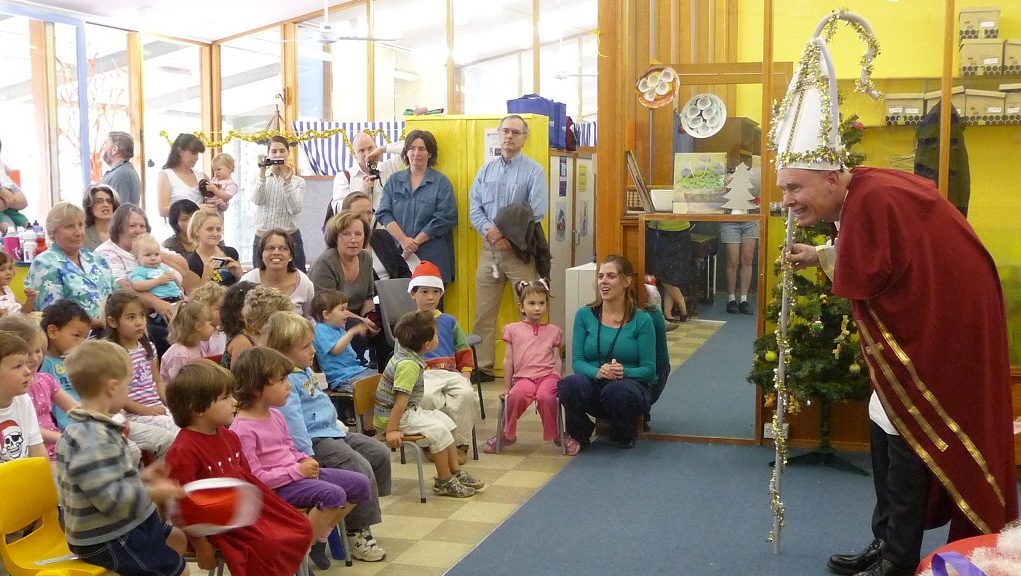 Sankt Nikolaus has been seen at GAP this week already, and will return on Friday for the Thurs/Fri class. As always, it is charming to have him visit.  (The photo above was taken with that same Nikolaus at the GAP in 2008!)
.
Nikolaus is once again giving out traditional Christmas oranges, together with Christmas stickers and a little chocolate.  The kind saint has obviously got a good connection with the German Embassy as their logo is on the little packets of German gummy bears he has been leaving in the children’s shoes!
.
Why not toys? Why oranges? you might ask.  Well, apart from the fact that our children live such wonderfully privileged lives in Canberra and receive what many would consider to be far too many material objects and toys already; and putting aside the fact that many plastic toys eventually just contribute to landfill or end up in the Pacific Garbage Patch …. oranges and Sankt Nikolaus are a long-standing German tradition.
.
According to the legend, Sankt Nikolaus once heard of a family so poor they were planning to sell one of their children into slavery.  Saint Nikolaus visited the family at night, and wanting to leave money anonymously for them, he dropped three golden balls down their chimney.  These landed in one of the children’s socks which had been hung near the chimney overnight to dry.  And so the tradition started.
.
In times since, oranges have been used to represent the golden balls given by Sankt Nikolaus.  Oranges were rare and precious in those days.
.
In a more recent example, one of our GAP parents who grew up in East Germany remembers that oranges were still considered a luxury when she was a child, and that to receive one at Christmas was a very special treat.
.
So the children are not getting “just oranges” – they are sharing a legend, a tradition, and some great German culture.   Sankt Nikolaus mentioned to the children today that they were also getting vitamin C from their oranges, and one of the children corrected him: Oranges start with vitamin O! 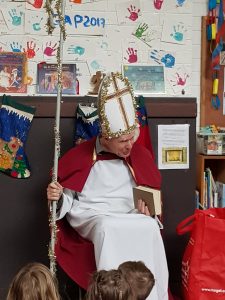 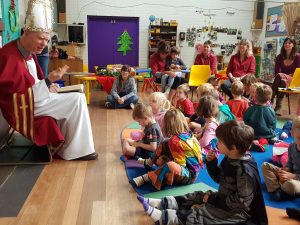