The challenge was on.  Each patrol was given $20 and let loose at the shops.  The idea was to shop and cook a meal for themselves, for $20 or less.  They were also allowed to use any salt, spices or sauces they found at the  scout hall.

Their scout leader was delighted to see a lot of healthy discussion going on, followed by quite a healthy selection of foods emerging from the shops.

Back at the scout hall, the kitchen turned into a hive of activity as the Scouts cooked up their ingredients into great feasts. There were pasta dishes, fresh salads, meat and veggie sauces, and desserts. 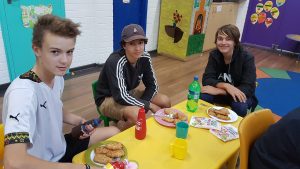 Our Venturers also had a go at this – and served themselves a meal of fish, soft drinks, ice cream and lollies, after which they complained of stomach-aches!

We all learned a lot that evening!