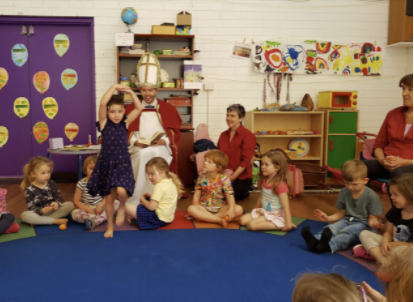 Der Nikolaus war da!  The children had a really lovely visit from Nikolaus this week and since parents couldn’t attend this year, I thought I’d share this blog with you.

The day before our visit from Nikolaus, we baked and decorated some wonderful Christmas cookies, ready for him.

With the aroma of our baking still lingering in the air and a delicious feeling of anticipation this morning, we lined up our shoes very neatly near the door, and went to sit in our morning circle to sing some of our Christmas songs that we have been practising.  Then just as we were excitedly discussing Nikolaus’ expected imminent arrival, there was a loud knock at the door!  Der Nikolaus war da!

Nikolaus made a rather spectacular entry (the jury is out as to whether he meant to trip on the stair or not), and the children sat in awe, with big eyes and big grins as he made his way gliding along in his grand outfit to the morning circle to join us.  Nikolaus wears a snowy white robe, a flowing cloak, a tall mitre hat, and he carries his bishop’s crook and golden book.  Our classy Nikolaus was also sporting a very smart bow tie.

Nikolaus introduced himself and kindly said that the children could call him Nikolaus or Nik or Niko… but please NOT Laus!

Nikolaus asked what the children had been doing at GAP so we sang our GAP school song to him, in which one of the lines is “wir basteln, singen, spielen und lernen hier”.  He enjoyed hearing that and said he also loved Christmas songs, so he joined the children in singing O Tannenbaum.

There was then even more merriment as Nikolaus pretended to get the children’s names mixed up, and asked them to show him various tricks they could do like walking backwards, hopping on one foot, jumping as high as they could, singing as deeply/high/loudly as they could, etc.

Some children showed Nikolaus how they could dance, and at one point Nikolaus stood up to show the children how he could spin around and twirl his cape!  We all LOVED him!

Nikolaus then treated us all to a demonstration of how high he could jump:  He sprang up from behind the children, leapt over their heads and landed with gusto in the middle of the circle!!!!  We were all AMAZED!  I can guarantee that nobody has ever seen this sight before in the history of Nikolaus (and well done, Lisa3 for capturing this shot)!

Every child received a delicious apricot and a Christmas chocolate from Nikolaus, and I’m sure he made a note in his Golden Book of Good Children about those children who remembered to say “Danke”.

The class presented Nikolaus with some of the cookies they had baked and after admiring each of them he said he would take them home to his wife Frau Nikolaus.

We were able to get a class photo with our wonderful Nikolaus.

Nikolaus departed as the children sang the last verse to their Nikolaus song, about how grateful they are to him…

When the children went outside to play, they each found a little treat from Nikolaus in their shoes.

Thanks, Tobias, for being our GAP Nikolaus this year (as well as being on the committee and co-coordinating Spiel und Spass). Today’s performance will definitely become legendary at Spielwelt!