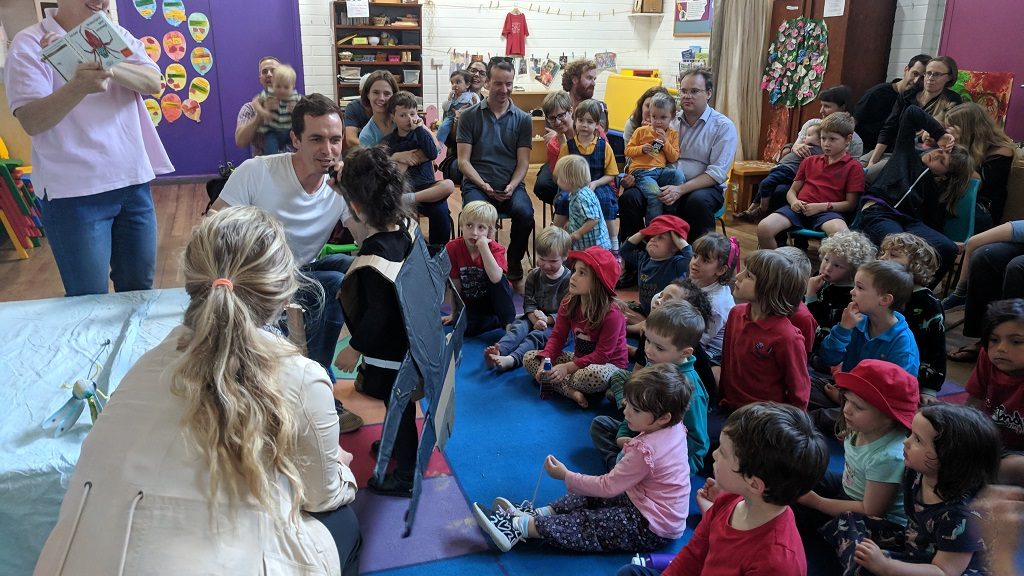 What better way to spend a warm spring evening than at the annual German story night?  The evening kicked off with outdoor play and a light dinner before we all ventured inside for the story telling.  Children and adults alike were treated to three stories: one story with actions, one short and sweet, and the third a puppet play.

One of our GAP dads, Torsten, and his daughter told the story ‘Die kleine Spinne spinnt und schweigt’ (The Very Busy Spider).  The little spider (played by the daughter) kept busy weaving her spider web as one by one, various farm animals (all played by her dad) tried to entice her to do something else. The children in the audience enthusiastically helped imitate the noises of the various animals as the story unfolded.  Our young spider, not quite happy with her dad’s performance, took hold of the microphone in an impromptu moment of up-staging her dad, to show him exactly how loud a duck should quack.  This quickly devolved into a barnyard coup as the children in the audience then took over, bleating, mooing and quacking into the microphone resulting in a raucous scene! It was a rather unforgettable performance!

Keeping with the barnyard coup theme, our librarian dad, Florian, treated us to a beautiful rendition of Farmer Duck.  Again, animal noises were required from the audience, who did not disappoint.  The children felt for the duck who had to do all the work while the farmer lay around and ate chocolate, so there was great cheering when the duck managed to rally his barnyard friends and stage their own raucous uprising to put things right on the farm.

Next was the puppet play by GAP mum Joey (the prince) and GAP dad Rainer (the princess). Children and their parents giggled along as the royal plans to make soup went strangely wrong.  The poor princess muddled up common German words, and ended up trying to use someone’s head (‘Kopf’) and then someone else’s ponytail (‘Zopf’) instead of using the required saucepan (‘Topf’).   Superbly narrated by our amateur puppeteers who had the audience in stitches.

The night ended as it had started with more playing, eating and mingling before parents had the unenviable task of convincing the children that it was time to go home.

See you all at Oktoberfest on Saturday 3rd November!