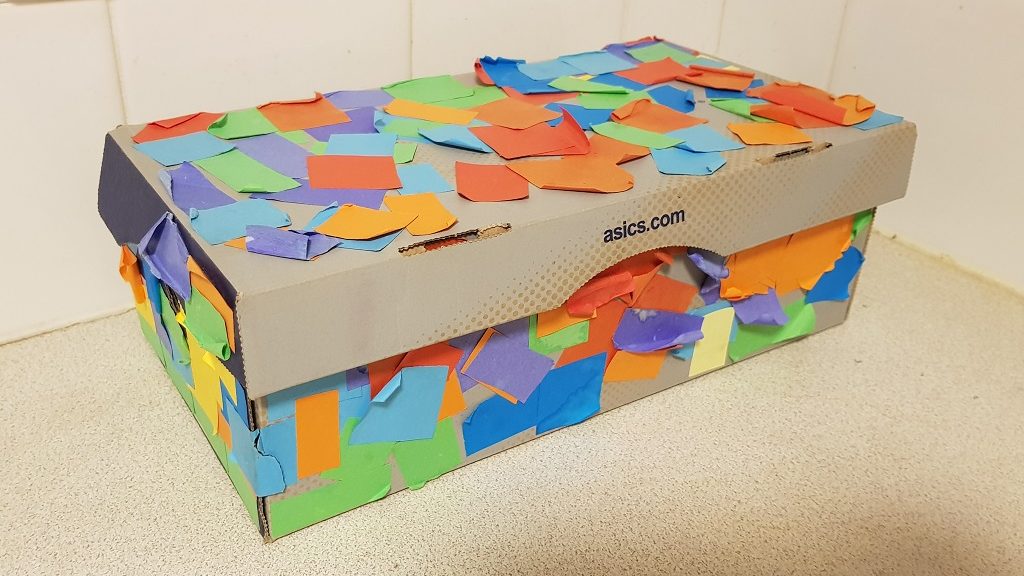 Mystery box (Rätselkiste) is a very popular routine in our GAP sessions.

If you want to play it at home, here is a little “How to”:

Find an empty box.  You might like to use a cereal box or shoe box. Any box will do. Decorate it together if you like.  Here is one of the GAP’s Rätselkiste.

Now you are ready to play.

Ask your child to hide a random item in the box.  It can be anything that fits in your box.  Ask your child to give you clues / describe the item so you can guess what it is, in German, if possible.  Once you’ve guessed it, you or someone else can have a turn to hide something, or the child can find another object and have another turn.

At GAP we always start by shaking the box and asking, “hart oder weich?” (hard or soft?) After you’ve figured that out, your child should give you at least 3 clues, then you can start guessing. (It’s even more fun if there are at least 2 people guessing – this could be you and the teddy bear. Pretend you are in class if you like, so you have to raise your hand if you want to guess, and the child decides whose turn it is to guess. That’s the way we do it at GAP.)

Once you or teddy have guessed the item, the child takes it out of the box and shows it around (to the assembled people/teddies).

If you want to be really authentic to how it is played at GAP, you can ask the person showing the object around, “Dürfen wir es anfassen oder nur ansehen?” (Are we allowed to touch it or just look?)

Here is an example:

A toy fire truck is hidden in the box.

Then you ask, “Was kannst Du uns noch verraten?” (“What else can you tell us?”)

At that point you could raise your hand and once you get invited to talk, ask, “Darf ich etwas fragen: Wie viele?” (May I ask a question: How many?)

Encourage your child to use German words if you can.

Make it funny – let Teddy have a silly guess, and then laugh at why that is silly.

For those wanting to achieve the next level of GAP authenticity, you could peg a reminder clothes peg on the tshirt of the person who is allowed to bring in tomorrow’s Raetselkiste item!  It is quite an honour to be given the highly prized Raetselkiste reminder peg, of course!

If your German isn’t that great, but you know a few words, feel free to sprinkle them into conversation anyway. Anything is better than nothing, and will help keep up your child’s vocabulary. Children will be able to separate the two languages after a while, but mixing them for a while is fine too.  The children mix languages themselves when they first start to learn too (as you may have noticed).    In the example above, you might say, “Haa haa haa! Ist ein Hund rot, with a siren and four Raeder? Nein!  That’s komisch!”

If you follow along in our remote learning activities, you’ll pick up more vocabulary yourself as well.